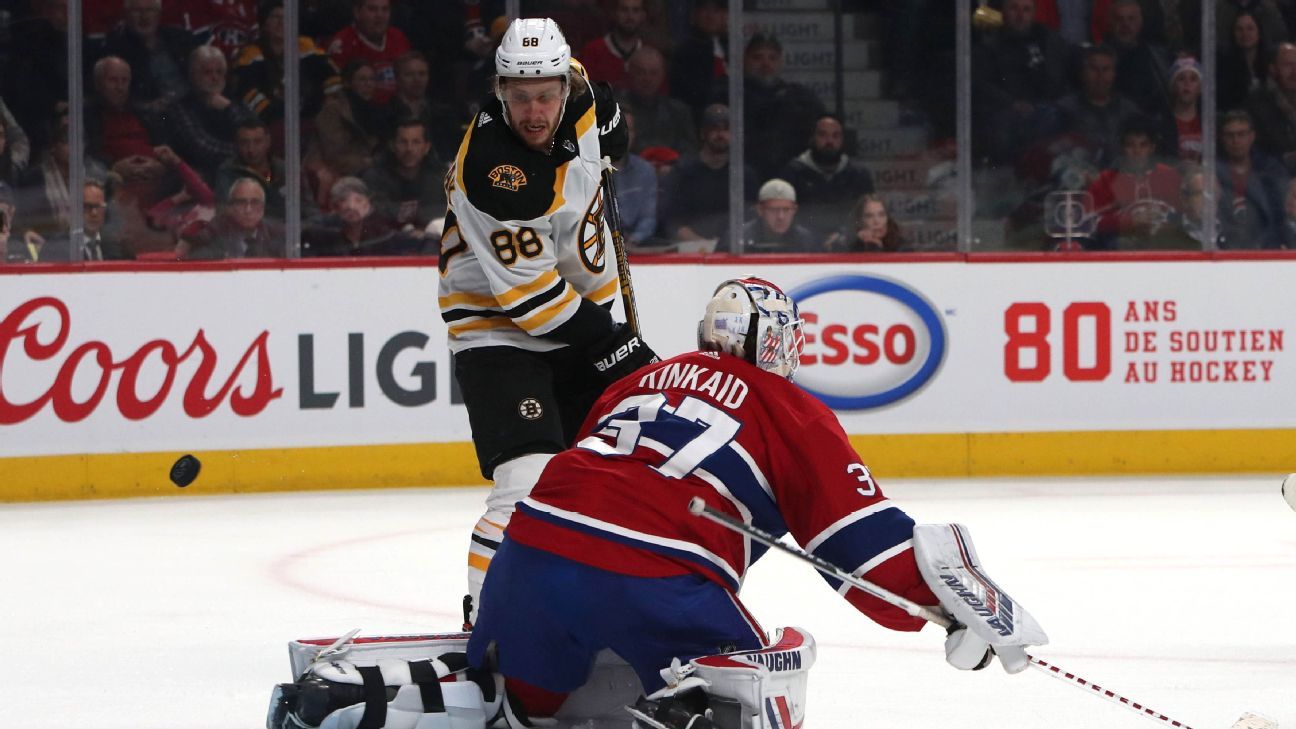 MONTREAL — The Boston Bruins continue to dominate the Montreal Canadiens … and continue to revel in it.

David Pastrnak recorded his second hat trick of the season and the Eastern Conference-leading Bruins routed the Canadiens 8-1 Tuesday night. Boston is now 8-2-1 in the last 11 games against Montreal.

Jake Debrusk, Brad Marchand, Anders Bjork, Charlie Coyle and Danon Heinen also scored for the Bruins (16-3-5), who have won four straight and made quick work of their rivals, racing out to a 3-1 lead after the first period, that grew to 6-1 at the end of the second.

“This is probably the rink that we love to silence the most. We’re not going to say the game’s over by any means,” Marchand told NESN at the end of the second. “Anything could happen; we’ve seen that already this year. But it’s a lot more fun when this rink is quiet, you know, because they’re very loud and obnoxious. So it does feel good to silence them.”

Mission accomplished, though it was not without effort from the Montreal side. In fact, the Canadiens outshot Boston, 37-24, but Bruins backup Jaroslav Halak made 36 saves and improved to 6-0-0 against Carey Price, his former teammate in Montreal.

Marchand, Coyle, David Krejci and Torey Krug had two assists apiece, while Sean Kuraly had three, for the Bruins, who will take on the Ottawa Senators Wednesday, as the road trip continues.

Captain Shea Weber scored the only goal for the Canadiens (11-8-5), who have lost five straight.

Price gave up five goals on 11 shots before being pulled in the second period. Keith Kinkaid stopped 10 of 13 shots in relief.

Boston extended its points streak to eight games (5-0-3) and moved ahead of Washington atop the conference standings.

Claude Julien made no changes to a Canadiens team that blew a four-goal lead and lost 6-5 to the New York Rangers on Saturday.

Price gave up six goals on 34 shots to the Rangers and struggled even more against the Bruins, who were without Patrice Bergeron (lower-body injury).

A nice give-and-go led to Debrusk’s opener on the power play at 8:03 of the first period. Weber tied the game at 12:41 on a rebound at the side of the net.

That’s when Pastrnak got to work on his seventh career hat trick. The NHL’s leading goal scorer, Pastrnak beat Price with a one-timer on the power play at 14:24 for Boston’s second score on five shots.

Marchand made it 3-1 on a bad giveaway by Jeff Petry behind his own net with 37 seconds remaining in the first. It was the winger’s 600th NHL point. Price conceded three goals on eight shots in the first.

Pastrnak’s goal eight seconds into the second period sealed Montreal’s fate, and Bjork gave Boston a 5-1 lead on a breakaway a minute later.

Julien took a timeout and pulled Price, the first time that has happened since Dec. 9, 2017.

Pastrnak completed his hat trick when he deflected Brandon Carlo‘s shot past Kinkaid at 9:06 of the second. Pastrnak has 23 goals in 24 games this season.