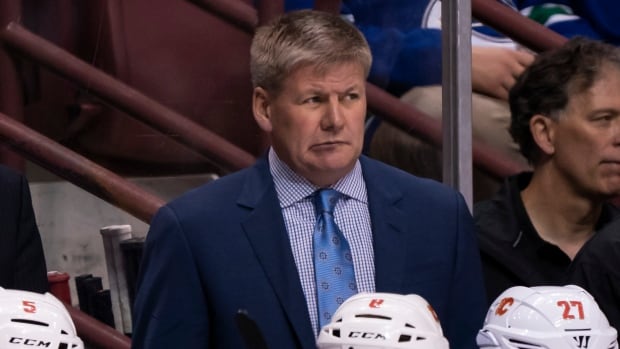 This column is an opinion by sports freelance writer Vicki Hall. For more information about CBC’s Opinion section, please see the FAQ.

The Calgary Flames are set to hit the ice tonight in Buffalo without the services of Bill Peters, who is under investigation for allegations of racism and abuse levelled by former players.

Should the allegations be proven true, the Flames will undoubtedly fire their head coach. After all, the NHL issued a statement Tuesday calling the alleged behaviour “repugnant and unacceptable” – and it is.

But the story can’t end with the dismissal of Peters. The hockey world should not chalk this up as one old-school coach who failed to keep up with the changing societal mores.

The NHL likes to say that hockey is for everyone. In fact, the league is designating February as “Hockey Is For Everyone” month. You can even buy a shirt with the words emblazoned across the chest.

None of that matters if the reality doesn’t live up to the slogan.

It’s time for those in power to listen, even if the message is difficult to hear.

The latest wake-up call came Monday evening when Akim Aliu tweeted about his experience playing for Peters in 2009-10 with the American Hockey League’s Rockford IceHogs.

Now living in Toronto, the Nigerian-born Aliu wrote that Peters: “Dropped the N bomb several times towards me in the dressing room in my rookie year because he didn’t like my choice of music.”

Not very surprising the things we’re hearing about Babcock. Apple doesn’t fall far from the Tree, same sort of deal with his protege in YYC. Dropped the N bomb several times towards me in the dressing room in my rookie year because he didn’t like my choice of music. First one to

admit I rebelled against him. Wouldn’t you? And instead of remedying the situation, he wrote a letter to John McDonough and Stan Bowman to have me sent down to the ECHL. 20 year old on pace for 20 goals in his first pro year with zero PP/PK time was off to a great start in his

The job of a coach is to nurture and develop hockey players. Their taste in music is irrelevant.

“He then walked out like nothing ever happened. You could hear a pin drop in the room, everything went dead silent. I just sat down in my stall, didn’t say a word.”

For context on perhaps why Aliu didn’t say a word, just look at the back story of a kid who didn’t even start playing competitive hockey until he was 12 after his family moved to Canada from Kyiv, Ukraine.

At 16, he refused to cram his naked body into a bathroom at the back of the Windsor Spitfires bus as part of a hazing exercise in the Ontario Hockey League.

A few weeks later in practice, the team’s captain, Steve Downie, tapped him on the shoulder and cross-checked the rookie in the mouth. After retreating to the dressing room for repairs, Aliu returned to fight Downie.

Selected by Chicago in the second round (56th overall) of the 2007 NHL entry draft, Aliu couldn’t shake his reputation as a troublemaker in a sport that values conformity. Soon after Peters flew into a rage over his choice in music, Aliu was demoted to the East Coast Hockey League. He didn’t play his first NHL game until 2012 with the Calgary Flames. (His NHL resume includes a grand total of two goals, one assist and 26 penalty minutes in seven games)

“This isn’t me being bitter,” Aliu told TSN. “I sat on this a really, really long time. It broke my heart. I think it made my career go downhill before it started.”

In the aftermath of Aliu’s comments, former Carolina Hurricane Michal Jordan accused Peters via Twitter of kicking him and also punching another player in the head in the middle of a game.

WATCH | A timeline of the Flames’ Bill Peters saga:

Calgary Flames head coach Bill Peters has come under fire after former player Akim Aliu accused the coach of using racial slurs towards him years ago. 2:11

It should go without saying that hockey players – even those making millions – are human beings who deserve to feel safe and respected at work. Their offices just happen to be hockey rinks, locker rooms, team buses and luxury airliners.

In the big picture, the allegations from Aliu and Jordan come on the heels of the Sportsnet firing of Don Cherry for singling out new Canadians for not wearing poppies in honour of Remembrance Day.

The danger, at this point, is for the NHL to look at Cherry, Aliu and Jordan as isolated incidents and hope it all blows over.

Earlier this year, Jonathan-Ismael Diaby walked off the ice during a semi-pro game in Quebec after a fan showed the defenceman a picture of a baboon on his cellphone. Other fans taunted Diaby’s family in the crowd, even telling them to go back home to the Ivory Coast.

In 2018, Givani Smith required a police escort to a Kitchener Rangers playoff game in the OHL because of online threats and racist taunts.

In 2014, Boston Bruins fans made racist comments about Montreal defenceman P.K. Subban after the defenceman scored a game-winning goal. And in 2011, a fan threw a banana at Philadelphia Flyers forward Wayne Simmonds.

Some numbers to consider: only five per cent of NHL players are black, according to a 2015 National Public Radio report. While dated, a 2013 Nielsen report said that 92 per cent of NHL television viewers are white and only three per cent are black.

If hockey is truly a game for everyone, it’s time to listen to those with lived experience. It’s time to encourage people to speak their truth.

The future of the frozen game depends on it.