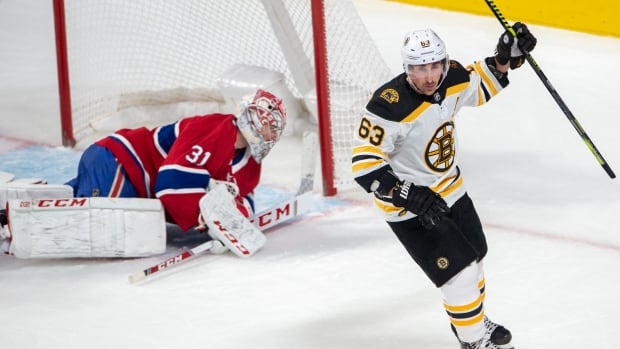 The slumping Montreal Canadiens are doing some soul-searching after a second embarrassing loss in as many games.

The Canadiens failed to bounce back after blowing a four-goal lead in a 6-5 loss to the New York Rangers last Saturday.

“You have two choices right now,” said forward Brendan Gallagher. “You can continue to fight and battle as a group, or you can choose to shy away from little bits of adversity. That’s the opportunity that we have right now — choose to fight and work our way out of this.

“It’s not fun, but it’s something that can be pretty rewarding if you’re able to do it. If you’re not, it’s frustrating and it continues to grow and grow.”

Pastrnak and the Bruins (16-3-5) scored early and often for their fourth straight victory. Boston extended its point streak to eight games (5-0-3) and jumped ahead of Washington atop the Eastern Conference standings.

“There’s always a way to turn things around” said Price, who gave up six goals on 34 shots to the Rangers. “Every team goes through tough scenarios throughout a long season and right now we’re in one of those funks.

“We can’t dwell on it for too long. I’ve been in this game long enough to know you can’t pout your way out of a situation like this one.”

Patrice Bergeron missed the game with a lower-body injury but the Bruins offence was firing on all cylinders without him.

Bruins backup Jaroslav Halak made 36 saves and improved to 6-0-0 against Price, his former teammate in Montreal.

A nice give-and-go led to Debrusk’s opener on the power play at 8:03 of the first period before captain Shea Weber tied the game at 12:41 on a rebound at the side of the net.

That’s when Pastrnak got to work on his seventh career hat trick.

The NHL’s leading goal scorer beat Price with a one-timer on the power play at 14:24 for Boston’s second tally on five shots.

Marchand made it 3-1 on a bad giveaway by Jeff Petry behind his own net with 37 seconds remaining in the first — the winger’s 600th NHL point. Price conceded three goals on eight shots in the first.

“The mistakes are costing us,” said coach Claude Julien. “We have to fix that if we hope to get back on track. It’s a loss of focus. Right now those mistakes are more than they were before. We’re trending in the wrong direction.”

Pastrnak’s goal eight seconds into the second period sealed Montreal’s fate and Bjork gave Boston a 5-1 lead on a breakaway a minute later.

Julien took a timeout and pulled Price from the game but the onslaught continued.

Early exit from the crowd

Pastrnak completed his hat trick when he deflected Brandon Carlo’s shot past Kinkaid at 9:06 of the second.

Coyle made it 7-1 on a one-timer at 8:26 of the third as Canadiens fans left Bell Centre en masse. Heinen added an eighth for Boston with 2:02 left in the game.

“It’s good that a lot of guys got on the score sheet,” said Pastrnak, who has 23 goals in 24 games this year. “Two points is two points, no matter how you get there. Whether you win 1-0 or 8-1, it doesn’t matter for tomorrow. But we can enjoy it tonight and get some confidence and wash it off tomorrow.”

The Bruins are 8-2-1 in their last 11 games versus Montreal. The teams meet again in Boston on Sunday for the third of four encounters this season.